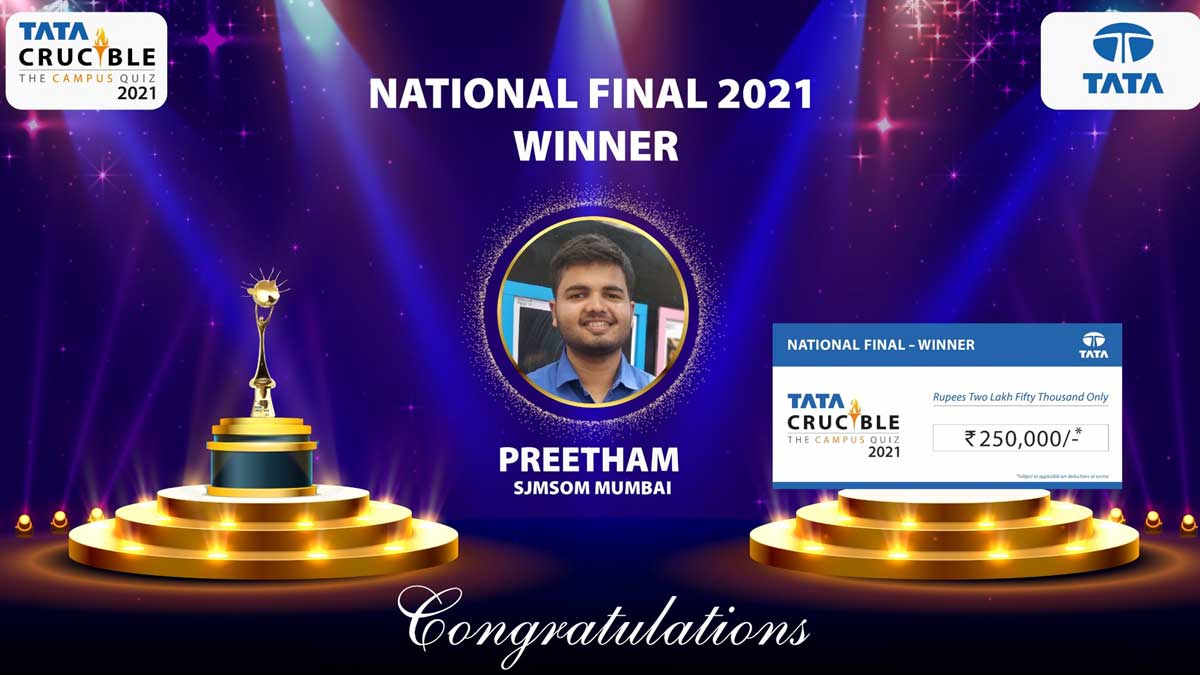 For the first virtual format of the Campus Quiz, the country was divided into 24 clusters. These clusters were further grouped into four zones- south, east, west, and north. The winners from each of these clusters battled it out in the Zonal Finals, with the four winners of the Zonal Finals making it to the National Finals. The runners-up from the four Zonal Finals competed in a Wild Card Final, with 2 out of the 4 runners up making it to the National Finals. Pratyush Goel from IIM Bangalore, Preetham Upadhya from SJMSOM, IIT Bombay, Ankit Jain from NSIT, Delhi, Akash Verma from IIM Shillong, Hem Maradia from IIM Lucknow, and Muhammad Mahatab from CNLU Patna formed the diverse group of participants who secured their place in the National Finals.

The occasion was graced by Mr. Bhaskar Bhat, Director, Tata Sons Private Limited. Speaking about the quiz, Mr. Bhat said, “These are difficult times, with the COVID still around and the uncertainty. But I think, during these times conducting events like this, and celebrating them and making people participate, that shows resilience. The quiz celebrates not just the youth of India, but also the power of technology to bring people together. What attracts people towards quizzing is the ‘Curiosity Quotient’ and Tata Crucible quiz helps to keep the curiosity alive for not just the participants but also the viewers,” Congratulating the finalists, Mr. Bhat added, “I’ve always had great hopes for India but after looking at this quiz, I have an even greater confidence, that India’s future is bright.”

The finale was a captivating affair, with the winner being declared after a tie-breaker question. Ecstatic about his victory, Preetham Upadhya said, “Similar to a sporting event, the Tata Crucible Quiz has become a mandatory fixture in the quizzing calendar, which all of us are always looking forward to every year. This year, even with the pandemic, the quiz was organized wonderfully. The virtual platform of the quiz ensured our safety, while not compromising the quality of the quiz in any way.  The fellow participants were all equally good quiz-takers. The finale could have gone either ways, I’m incredibly grateful that it went in my favor.”

Stepping up to the needs of the new normal, Tata Crucible Quiz- reimagined itself in a virtual format for both the corporate and campus editions. This year’s online iteration of the campus quiz, facilitated the participation of students from various parts of the country, providing them with a platform to show-case their acumen and cognizance.

Giri Balasubramaniam aka ‘Pickbrain’ hosted the finale in his signature charismatic style, quizzing the participants on a host of diverse topics, which tested their strategic thinking and intellectual abilities.

The prizes for this edition were supported by Tata CliQ.