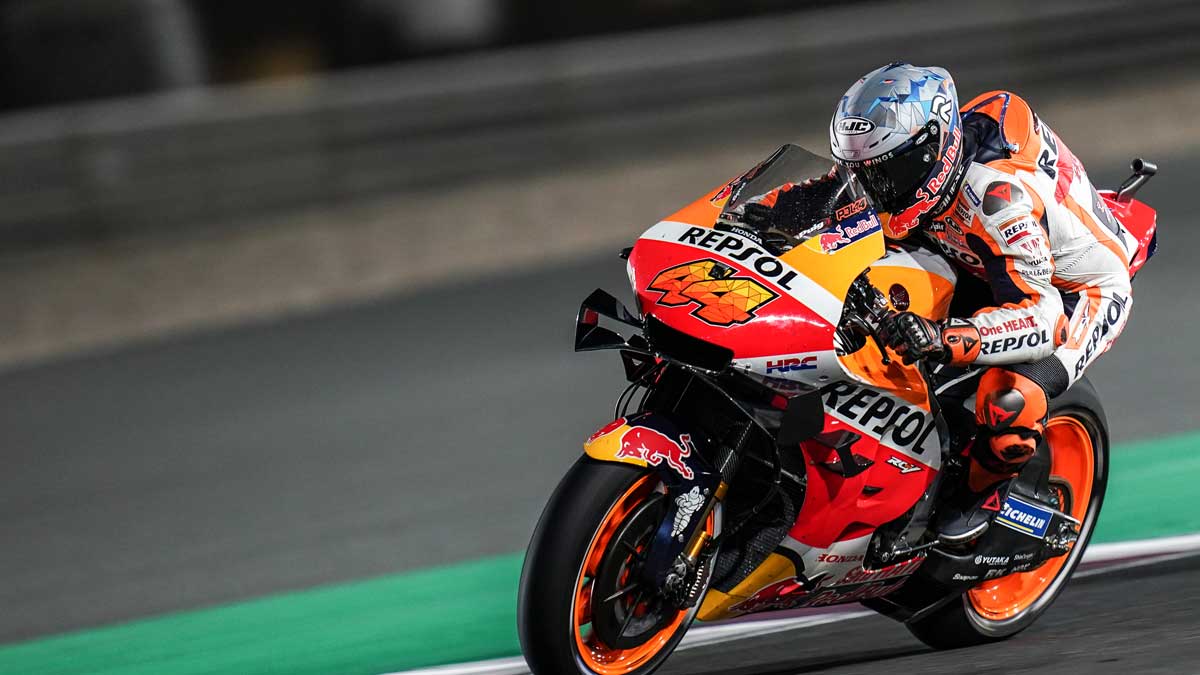 There were flashes of what’s set to come from a strong and consistent Pol Espargaro, matching the pace of the leaders throughout the race as Bradl recovered from a difficult start with an aggressive ride through the field.

For the second time in two weeks, the MotoGP World Championship lined up on the grid in Qatar. What followed was the closest top 15 in MotoGP history, just 8.928 seconds splitting the leading 15 as fans around the world were treated to a spectacular race.

An up and down weekend for Pol Espargaro was put to the back of his mind, the 2013 Moto2 World Champion getting another strong launch on the Honda RC213V as the lights went out. Fighting with those around him, Espargaro worked to hold his position but dropped back on the sixth lap after a mistake.

Rallying, Espargaro moved back past Morbidelli midway through the race as he matched the pace of the podium contenders. Unrelenting lap times saw the younger Espargaro brother cut a two second gap in half with eight laps still to go as the leading pack fought with each other. Unfortunately, a mistake into Turn 1 ended his hopes of repeating his top-ten finish from a week ago. Crossing the line in 13th, Espargaro was looking for more this Sunday but once again showed there is huge potential inside himself and the RC213V. After multiple weeks riding in Qatar, Espargaro is looking forward to trying the Honda on a new circuit.

Stefan Bradl’s Doha Grand Prix was complicated by the start of the race, dropping from 11th on the grid down to outside the points by the first corner. Keeping calm, Bradl put together an aggressive but controlled race as he steadily moved forward. Lapping in the low 1’55s saw the German make up his lost ground and return to fighting for points. With just a handful of laps to go, Bradl found himself battling against Espargaro for top Honda honours out on track. Ending just 6.453 seconds from the win, Bradl walks away with 14th place.

The MotoGP World Championship will now prepare to return to the dynamic Portimão Circuit for round three of the World Championship. Having shown well there in the previous year, the Repsol Honda Team are aiming to fight for the top positions once again.

“This race we once again showed that our potentially is incredibly high, our pace was really strong especially during the middle and the end of the race, but I made two big mistakes which ruined our chances. We could have been fighting for a lot more, especially without the second error. We have again been able to finish close to the winner despite this, but I am left wondering what could have been. These two races have both shown that our potential on the Honda is very, very high but we still need to work on a couple of things including Qualifying. There’s more to come, we will try again in Portimão.”

“The first thing I did when I came back to the garage was to apologise for the start, it was my mistake. It’s a problem I have never had in my career before and it’s very unfortunate because here we lost probably two seconds. After this big mistake our pace was very good, and I was able to catch the group and ride aggressively. I am quite angry because I was riding well and if it weren’t for the start, we could have been even closer and fighting for higher positions. In the end it is what it is. Now MotoGP returns to Europe and I am sure we will see Honda stronger there again.”