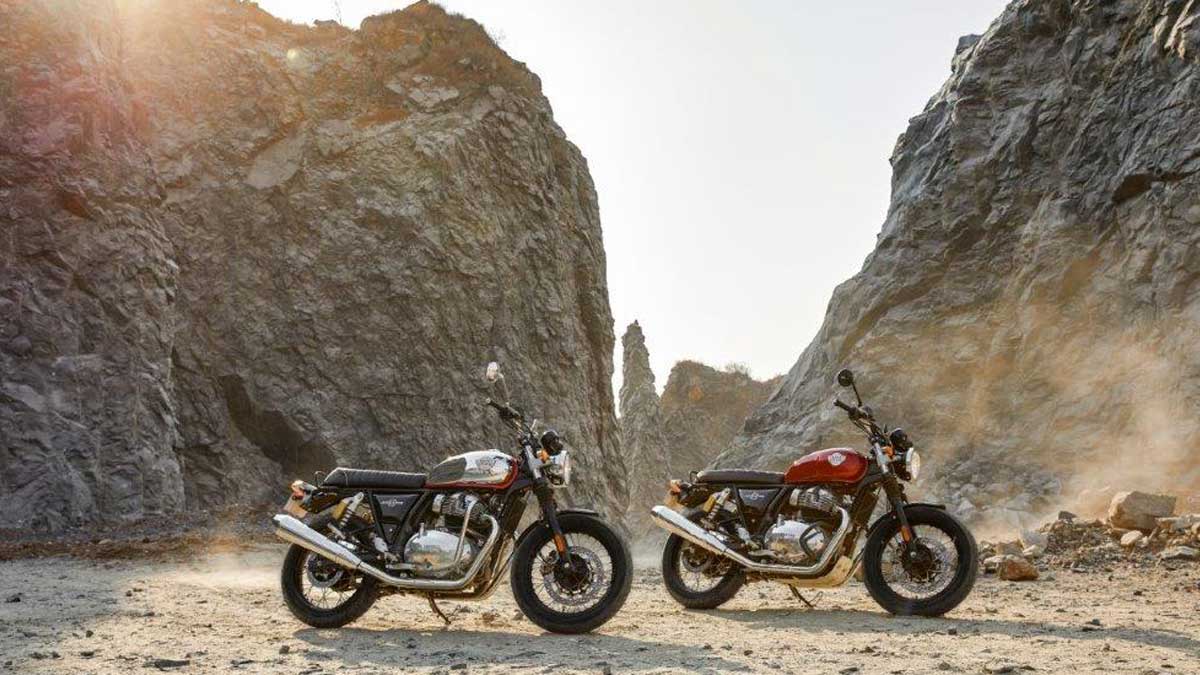 Royal Enfield, the global leader in mid-size motorcycles (250cc-750cc), today announced the launch of new colourways on the 650 Twin motorcycles – the Interceptor INT 650 Twin and the Continental GT 650 Twin. The motorcycles will also be available with a host of new MiY options which the customers can choose to personalise their motorcycles. The MiY options include seats, touring mirrors, flyscreen, sump guards and a host of options that add to the style and enhance the riding experience.

Speaking on the new colours of the 650 Twins and the wide ranging MiY options Vinod K. Dasari, CEO Royal Enfield said “The launch of the 650 Twins marked a new chapter for Royal Enfield and for the mid-sized motorcycle segment. The global success of these motorcycles over the last couple of years has been phenomenal with the Interceptor growing the 500cc+ category by more than 4-times in India, and also becoming the best selling naked motorcycle in the mid-sized category in the UK in 2020. The introduction of Make-It-Yours on the 650 Twin motorcycles in October last year further enhanced the personalization possibilities and overall appeal of these motorcycles. MiY unlocks thousands of personalization options and is becoming a game changer for Royal Enfield. We believe that the newly introduced colourways on the Interceptor 650 and the Continental GT 650, along with unique personalisation options via MiY will go a long way in bringing more enthusiasts into the brand fold.”

The Interceptor INT 650 Twin is now available in two new Standard (single tone) colourways – Canyon Red and Ventura Blue; two new Custom (dual tone) colourways – Downtown Drag, and Sunset Strip and has a new updated version of the ‘chrome’ variant in the Mark 2. The Mark 2 Chrome Interceptor is an ode to the original Interceptor 750 that’s redolent of the heydays of California’s sun drenched culture of the 60’s. The Interceptor INT 650 Twin retainsthesingletone Orange Crush colourway and the dual tone Baker Express that has been extremely popular with the customers and the motorcycling community across the globe. The Continental GT 650 cafe racer has also been introduced in five new colourways. Taking inspiration from the Continental GT of the 60’ and calls from die-hard fans of this motorcycle, Royal Enfield has reintroduced the Continental GT 650 Twin in its most loved Rocker Red Standard (single tone colourway) and has also introduced the motorcycle in British Racing Green Standard colourway. The motorcycle is also available in two new Custom (dual tone) colourways – Dux Deluxe and Ventura Storm, and has a new updated version of the chrome variant in Mister Clean. With seven colour options on the Interceptor INT 650 Twin, and five new colourways on the Continental GT 650 Twin, both motorcycles will get a range of aesthetic updates as well, to compliment the new colourways. Apart from the new colours, Royal Enfield is introducing blacked out rims and mudguards in single tone colour variants of the Interceptor INT 650 Twin, adding to the overall appeal of the motorcycle. This update has been made after receiving a fabulous response from the community on the blacked out rims that were available only on the dual tone colours earlier.

Royal Enfield has introduced a host of new offerings via MiY for the Interceptor 650 enhancing its roadster appeal. To enhance the riding comfort on the Interceptor 650, two new seat options – a standard touring dual seat and touring seat with ribbed styled stitching and cowl finish have been introduced. Enhancing the protection on the Interceptor 650 will be engine guards and sump guards available in various finishes. To add to the style and riding experience, the Interceptor 650 will have a host of offerings such touring mirrors, tall and short tinted flyscreens, fork gaiters and many more. Adding to the cafe racer style of the Continental GT 650, MiY will now have several personalisation and accessorisation options like the painted screen kit in black, bar end mirrors, single seat cowl in various colours. There are a host of other offerings as well such as sump guards and engine guards for additional protection. All of these personalisation and accessorisation options are homologated and the accessories come with a two-year warranty.

Launched in September 2018, the 650 Twins, were received extremely well by motorcycle enthusiasts in India and across the globe. The Interceptor 650 – the quintessential roadster, won several awards including the prestigious Indian Motorcycle of the Year 2018 and has continued to dominate the upper end (500cc and above) of the mid-sized motorcycling segment in the country. Even in the international markets, the Interceptor INT 650 Twin has been extremely successful and has won several prestigious awards including MCN’s Best Retro Motorcycle of the Year 2019 and also for the 2020 in the UK, becoming the only Indian brand to do so, not just once but twice in a row. The Interceptor 650 Twin has also been the highest selling naked style motorcycle for the entirety of the 2020 calendar year (as per MCIA data from January 2020 – to December 2020) dominating the mid-sized segment for over a year, propelling Royal Enfield to become one of the fastest growing motorcycle brands in the UK.  In the APAC region, the 650 Twins contribute to more than 50% of the volumes with the highest demand of the motorcycles in Thailand where the 650 Twins account for more than 65% of the volumes.