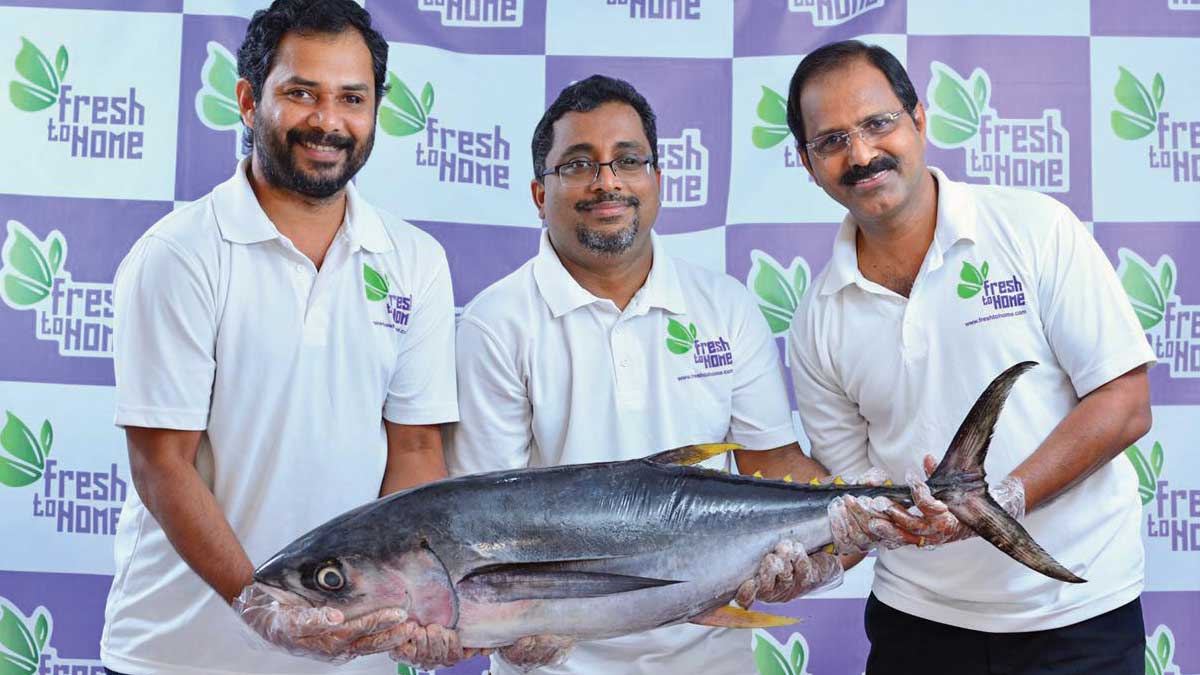 Living near Kaithapuzha backwater, Mathew grew up watching birds catching fish from the backwater with a flash strike and flying away holding the live catch between their beaks. Birds one after another flying away with  their struggling preys was an amazing scene for little Mathew. It was natural, he also wanted to fly away one day like a bird into the sky with a live fish between its beaks. Mathew Joseph never became a bird, but fulfilled his dream by becoming a very successful exporter flying fresh catches from the sea every day to different regions of the world from Kerala’s Nedumbassery airport.

Mathew Joseph started  his career as an accountant with a seafood export company in Alappuzha. After finishing his work, he used to go around the fish processing area and watch  the workers engaged in their work. He also learnt about how to select and purchase fresh fish from the market.

Watching his enthusiasm in learning things  and sincerity, the managing director of the company  transferred him to the purchasing and processing section and later gave him full responsibility of the section. Mathew worked there for 11 years and decided to quit and start something of his own in his chosen field.

He became an agent, supplying required quantity of  fish  to the fish processing and exporting companies in Alappuzha. That was a 24/7 job. There was hardly  any rest and the competition among the agents was very high, Mathew remembers.

Those were the toughest days in his life. Container lorries carrying fish from Tamil Nadu and other regions start reaching  the Alappuzha area from 12 midnight. The agents wait on the roadsides  at Aroor and other nearby places  to catch the first lorry. Any delay in reaching the place means the load goes  into other hands.

Mathew was rather enjoying the work as he loved “the labour of the trade.”

Once gathered enough money, he entered the fish processing and exporting  business.

His hard work started paying. Business has flourished fast because of his knowledge of the trade  and truthfulness in dealing   with local and overseas customers.

There was high demand for his fish in Dubai, Saudi Arabia, Singapore, Taipei and Australia. Soon he became a force to reckon with in the food exporting field.

In 2008, when his exporting was expanding to more countries, came a disaster in the form of a global economic recession that completely  paralysed the economic world. Markets fell across the world affecting global businesses. Many exporters downed their shutters due to lack of buyers for their products.

Mathew’s export business also suffered heavily. There were no takers and those who were ready to take the  products quoted very low price. Everybody at home was very upset. Those were the days when they forgot to smile, Mathew remembers.

At one night, the matter  came up at the dinner table and they discussed many ways to save the sinking business. There were many suggestions, but none received any applause.

Then Mathew’s wife Lillamma joined the discussion while serving the dishes. She asked, “Why don’t we explore the Indian market, which we never tried?  She also suggested entering online business, a new concept in the field.

This was the time when online marketing was picking up in India, thanks to the stable economy prevailing then in the country. The recession did not affect us at all, because of our strong economic policies. Companies  like Flipcart had already started minting money through digital marketing, though they then mainly sold books online.

To ensure quality of the fish procured from other states, the fish are first sent to labs for checking contamination and freshness

Everybody accepted her  suggestions. They  took a decision unanimously to open fish shops first in main cities and moved  forward. His brothers also joined him in the new venture. Transportation  of fish to the shops was  arranged.

A website called “Sea to Home” with the help of a software company in Ernakulam was developed, enabling people to choose and  order for fresh fish online. He had also made arrangement with local fishermen for fresh catch apart from fish from other cities.

To ensure quality of the fish procured from other states, the fish are first sent to labs for checking contamination and freshness. Even fish bought  from  Kerala market  were sometimes  found containing 85 per cent ammonia. The fish from other states were found contaminated with formalin. He   wanted to ensure the fish’s purity before it was delivered.

Now he employs his men at Arthunkal, a seashore village near Cherthala, one of the major fresh sea fish market  in Kerala to buy fish from the fishboats directly as they reah the shores. They post the live catch  on the website immediately to ensure the credibiliry.

Though when they started the online business, it was not very popular. It gradually  picked up pace as it even reached a stage that made him  unable to carry out the online orders. The  website also failed his business at times  because of overload.

A regular customer from Bengaluru came to his help when he failed to order through the website. Shan Kadavil, the customer, was the CEO of world’s biggest gaming company Zynga’s India operations; He offered to help setting up high capacity website.

In 2015 Mathew launched a new website “Fresh to Home” with Shan. The company now sells other products too apart from fish, like chicken and mutton through its online shops across major Indian cities. Even during Covid-19 lockdown across the country . it did not suffer much, though it had to shut down a few shops, its well-managed online delivery system did a wonderful work.

Now FreshtoHome has a healthy turnover of Rs 650 crore and plans to take it to Rs 1,500 crore soon. The fish startup recently raised $121 million in Series C funding led by Investment Corporation of Dubai (ICD).