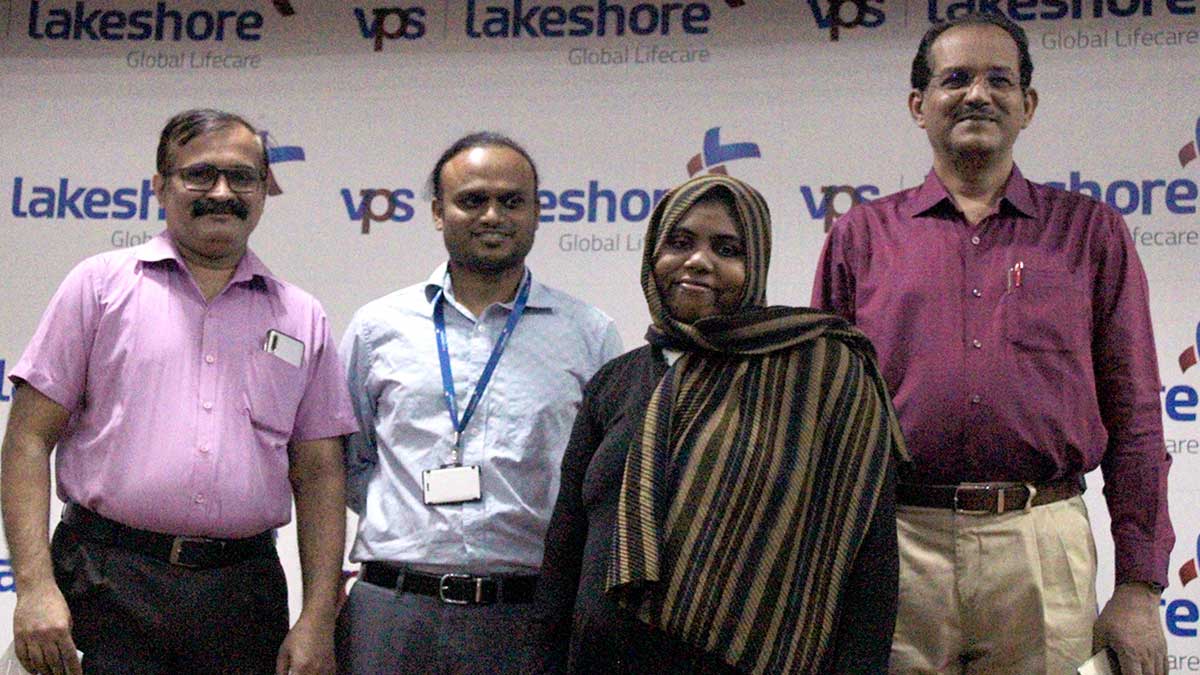 Vaheeda Beegum (31), a native of Lakshadweep who went through a life-threatening condition caused by a huge thyroid tumour which had grown into the chest cavity, was at last saved through a rare surgery at VPS Lakeshore Hospital in Kochi. The patient had developed severe stridor and was put on a ventilator as the tumour was blocking her respiratory passage completely. She also developed cardiorespiratory arrest and was intubated by an expert Anaesthesiologist Dr Chidambaram in Lakshadweep before she was airlifted to Kochi with the ventilator support. The mission of shifting the critically ill patient over the sea was carried out by Dr Khaleel Khan, Dr Rifan, Dr Anoosh and Mr Babu.

At the Minimally Invasive Surgery department at VPS Lakeshore Hospital, Kochi, her evaluation showed a huge tumour of thyroid fully occupying the neck and had grossly shifted the respiratory passage – trachea. CT scan showed that the tumour had grown into the chest in large size and was compressing the heart, bronchus and major blood vessels. She was having lung and cardiac problems as well.  The only option left to save the life of the patient was to remove the large tumour though it was a very risky task. Usually,  thyroid and other neck tumours are removed by keyhole procedures with no neck scars. But for Vaheeda Beegum, as her tumour was too large and extending into the mediastinum; it was decided to open the neck and mid part of the chest (sternum). Dr. R Padmakumar, Head of the Department of Minimally Invasive Surgery, Lakeshore Hospital, who led the team of doctors and para medical staff in the surgery, said they managed to remove the tumour above the heart and major vessels, safeguarding the bronchus and trachea. “During the surgery, there were several episodes of cardiac and respiratory adverse events but all were successfully managed. We took care of the nerves for respiration and sound on both sides. She was on ventilatory support for three more days,” Dr. Padmakumar said. She is now doing well and is able to talk, breathe and eat normally. Further course of treatment, if required, will be decided depending on the biopsy report.

The complex surgical procedure was carried out by the team led by Dr R Padmakumar included Dr Madhukar Pai – Sr. Consultant MIS, Dr Sujith D.S. – Cardiothoracic Surgeon, nursing staff including  Mr Sarin, Ms Jaya Lakshmi, Ms Tincy and Ms Soumya. The Anesthesiology team was led by Dr Jaya Susan. while Dr Krishna Teja, Mr Abdul Vahab, Ms Premna Subin and Ms Nimmy Jose did their best to ensure smooth and successful treatment for the patient. Timely intervention and support by the hospital CEO S. K Abdulla and Chief of Anaesthesia Dr Mohan Mathew also came in handy. Dr. Padmakumar also said the case is a warning to all those who suffer from thyroid swellings. “It is very important for patients to undergo surgical procedures for thyroid swellings before such complications develop,” he said.