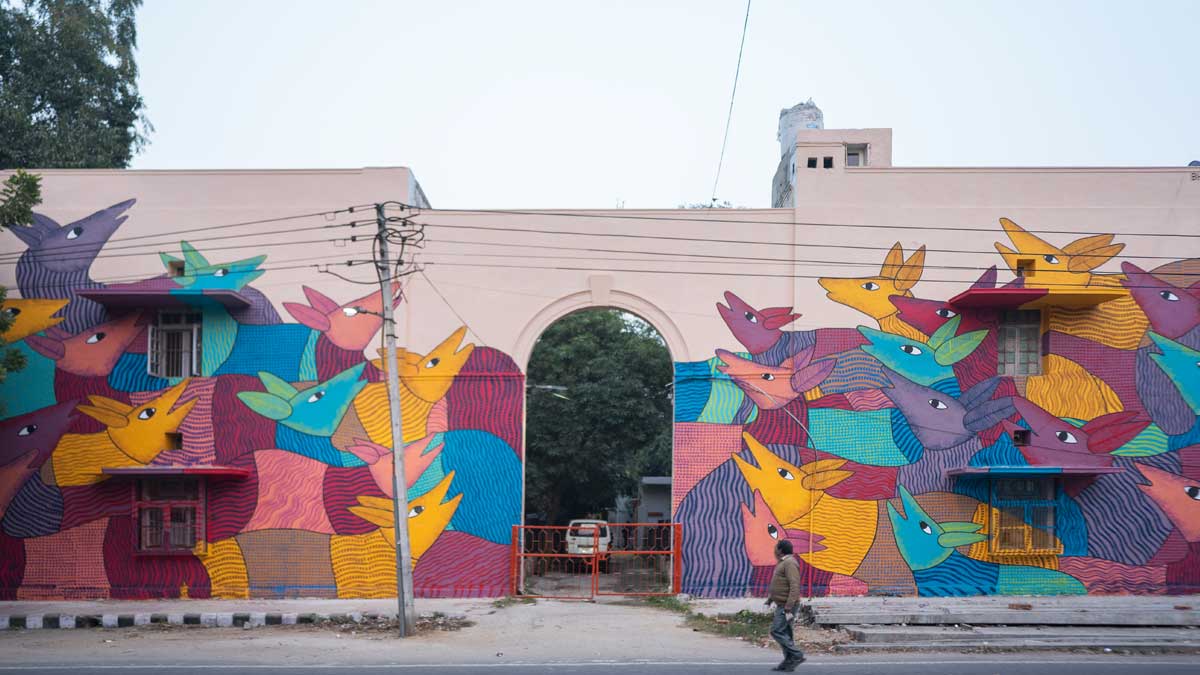 The Singapore Tourism Board (STB) has partnered with St+art India Foundation (St+art) to unveil a collaborative artwork in Little India, Singapore. The unique mural artwork titled, “Dancing in Unison” is the result of a shared passion between Indian Gond artist Bhajju Shyam and Singaporean artist Sam Lo. It is among the tallest art murals in the city.

The mural bears the fruits of many months of planning where both the artists have virtually connected to create this composition. Please refer to Annex A for the description of the mural.   Due to Covid-19 restrictions, it has been painted solely by Sam Lo.  This mural is one of the key highlights of Artwalk 2021, adding to the series of more than 20 murals that had been created during the past 6 editions of the public art festival in Little India which are a draw for local residents and Indian tourists alike.  This cross-border effort by the two artists resonates with the theme of Artwalk 2021 – “In Spite Of” – where artists overcome limitations and geographical boundaries to come together to realise their creations, made possible by their passions and hopes for harmony for the future.

This is the third time that both STB and St-art have partnered to showcase artworks by talented individuals from Singapore and India. The first was at Sassoon Docks, Mumbai during the launch of STB’s ‘Passion Made Possible’ brand in India in 2017.  More recently, at the Lodhi Art Festival in New Delhi in 2019, a Singapore lane featuring spectacular street art of Singapore was created at Block13-16 of the Lodhi Art District.

Speaking about this initiative, GB Srithar, STB’s Regional Director of India, Middle East & South Asia, said, “STB is happy to partner with St+art India Foundation once again. The limitations brought about by the Covid-19 did not stop us from innovating and showcasing a common passion for art between India and Singapore. We are honored to be able to bring Indian Gond art closer to the audience in Singapore through the collaboration between Bhajju Shyam, a maestro in Indian Gond art and Sam Lo, a Singapore contemporary artist. India and Singapore share many cultural similarities and we want to use this opportunity to strengthen the emotional connect between both countries. As we start 2021, this wonderful artwork will bring a message of cross-cultural friendship, colours and pique the interest of visitors to Little India. It is noteworthy that the mural is one of the tallest ever undertaken in Singapore.”

Bhajju Shyam is one of the primary living exponents of Gond art. He was born and raised in the village of Patangarh, Madhya Pradesh, which is known to be the home of the Gond Pradhan indigenous tribe.  He was awarded a Padma Shri in 2018, the fourth highest civilian award given by the Republic of India. Sam Lo is a self-taught Singapore-based visual artist whose work revolves around social commentaries fuelled by daily observations of their surroundings and research into the sociopolitical climate. Sam has previously visited India during Lodhi Art Festival where they conducted a workshop and painted a mural in Lodhi Colony with their signature sparrows design. Along with another Singaporean artist Soph O, they had given an artsy makeover to the Arjan Garh metro station in New Delhi.

Giulia Ambrogi, Curator and Co-founder at St+art India Foundation said, “We are delighted to be partnering with Singapore Tourism Board for the first time in the unique Singaporean landscape, to further build on what we have been cultivating since 2017. The collaboration between Bhajju Shyam and Sam Lo is a timely reminder that despite differences, we are all connected in inherent ways. It showcases the power in coexisting and breaking boundaries, and thus opens up new horizons to remind us of the healing and liberating power of art.”

Annex A – Description of Mural Art “Dancing in Unison”

The design of the mural celebrates the symphony of traditional and contemporary visions where India, one of the oldest cultures of the world and Singapore, a modern city-state, come together under a discourse around nature, as a metaphor of what links us all together. Through this mural on the wall of the 7-storey Broadway Hotel in Little India, both the artists lyrically investigated the value of nature and our relationship with it, by bringing together their perspectives, to reveal that despite varying histories and cultures, we all are interconnected. This inherent connection inspired the choice of going beyond geographical and systemic divisions, including the ones prevalent in the art world.

This collaboration explores the traditional elements and belief systems that inform Bhajju’s world, in conjunction to Sam’s contemporary one. The mural, titled “Dancing in Unison” embodies the idea that respect for nature and the environment at large is what will guarantee our co-existence. Every feature in the work extends on this idea of the necessary dance between our urban living and nature.  The tree – an iconic element from Gond art designed by Bhajju – engulfs the urban environment of human dwelling (personified by the windows of the building) becomes a metaphor for the universe where everything is interconnected from the land to the air.  Its branches host vibrantly coloured sparrows, an element which reoccurs in Sam’s work, as a symbol of freedom, being one of the most common birds in India and Singapore.  Sam’s deer, a revered animal in Indiaserves as a tribute to Gond art, manifests the contemporary interconnection where elements from different cultures are seen blending together in our globalised and accessible world.  Sam further reinforces this idea by designing a red ribbon, another common element in their work, as a reminder of an omnipresent energy that connects us all, and one which connects her beliefs with those of Gond Art.